Owners of the older model Hoofer’s have been bragging about how solid the bag is. With the new 2018 model, many improvements turns this bag into a must have for new and old users.

The Ping Hoofer is a great buy for golfers that are looking for a solid golf bag. Their 2018 model has a lot of improvements over the original that really makes the buying decision a no brainer. Old and new owners of Ping bags will find that the Hoofer is a valuable purchase when you want the best protection available.

Available colors for this model are graphite/silver/blue, navy/white/red, graphite/black/red, black/white/canyon copper and a plain black color. The design is solid, keeping the familiar Ping look that they’ve become popular for. Buyers will get a solid upgrade if this is their stand bag of choice for 2018 and onwards.

The price is on the low side, so this is easily a bag that passes the smell check for everyone. Beginners will love the price, intermediate players will love the stability and professionals will love the familiarity with other Ping golf bags. There really isn’t a glaring weakness to point out about this bag.

Established in 1959 by Karsten Solheim, Ping is one of the biggest American golf equipment brands. They are based in in Phoenix, Arizona and have many ties to PGA golfers. The whole idea of the Ping putter is what started the evolution of the company.

They were usually the first to innovate, especially when it came to high-quality cast clubs. When the company decided to start making bags, it was a natural transition that led to them selling to an already established customer base.

Because of this, they were able to perfect specific models that fit with where the industry was heading. That is why most Ping bags will contain the best of old traditional technology while mixing in newer modern tech.

Ping has high durability on all of their products, especially the bags. This can be seen in their lowest tier, so it isn’t isolated to expensive models. The Hoofer is an excellent example of a low priced bag that has great durability inside and out.

There are minor improvements with the padding in the straps and on the bag itself. Both of these improvements are meant to help golfers that carry a lot of equipment. As for long-term durability, the results are about the same across all models.

Hoofer is no different than their highest priced stand bag. Even though the materials are nearly identical from one Ping model to the next, it is the type of use it will see that determines durability. It does point to Ping having equal quality across all bags, but it also shows that they aren’t a leading brand that will get you 10+ years of uninterrupted usage.

The most surprising thing about the 2018 Hoofer is the price. There are many places that are selling it for less than the price of the 2016/2017 versions. This isn’t the first low cost Hoofer in the series, but it is the most surprising one.

The Hoofer 2018 model has a lot of improvements that make it better than any of its predecessors. The only reason to even consider the older models has more to do with nostalgia than actual features. With the 2018 model you also get a new set of colors, something that the company is stingy with when it comes to certain models.

The older Hoofers have nice color choices but the 2018 model takes a step further by making them stand out. There will be more on that in the price section of the review.

The reinforced top is made of high-impact polypropylene. Yes, it is a mouthful, but it protects your most expensive clubs and keeps them from banging into one another. Shoulder pads are flexible and built with SensorCool technology.

You won’t get rashes or bruises when carrying a full bag across the course. A cool feature of the included rain hood is that it is built with extra padding so you can use it to cushion the weight of the bag while walking. Not all rain hoods have this capability, and it would be nice to see it included with other notable brands.

Now this is where it gets interesting if you’re looking to upgrade from an older model Hoofer. They improved the design/color scheme, so it fits in with the rest of their 2018 lineup. This isn’t a huge overhaul, and in many ways is much of the same.

But Ping did make it a point to mix up the color choices so it wasn’t as dull as last year’s offering. The available colors are nice, providing a mix of bold and mellow selections. Hoofer has never been a knockout in the design department even when it first came out. With the 2018 model, they took a step in the right direction for next year’s design change.

There are plenty of them to go over, with the bulk being improved versions from older models. Ping did a good job by not removing the most important features. With the Hoofer 2018, they added new ones that will serve the users well.

Enough praise isn’t given for the rain hood and how it attaches to the bag. That is a big deal since a lot of users have complained about losing the rain hoods on the course. It isn’t the easiest thing to replace, so having a way to keep from easily losing it is helpful. And since it is such an essential part of the Hoofer feature set (padding) then that makes the attachment feature even more valuable. So if you’ve ever lost or misplaced a rain hood, then this is the Hoofer model to get so that it never happens again.

The biggest pro is that users of old Hoofer bags now have a reason to upgrade. There will still be some holdouts here and there, but the 2018 Hoofer offers the best upgrade value for older users.

The only reason to hold out for the 2019 model is improvements with the design. But that has already been accomplished in some ways with the 2018 Hoofer. There is a big enough change that most users will see this as a worthwhile investment rather than a vanity purchase.

Probably the five way top, which really shouldn’t be considered a con since they have different variations of the 2018 model. For a stand bag it won’t be too much of a problem, but there will still be users that prefer something much larger. The difference in price from the 5 way Hoofer and the 14 way is enough that it makes this a con.

It’s always nice to see a company making small improvements on their models. The 2018 Hoofer is a prime example of perfecting a product and enticing an entire golfing community to upgrade. 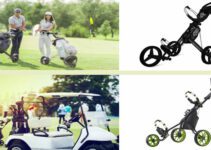 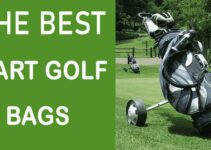 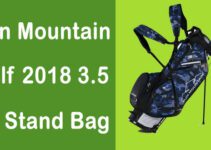